Bioluminescence – living light – is widespread in the oceans of the world. Light emission is produced as a result of a chemical reaction involving the oxidation of a substrate molecule called luciferin, often invoked by force or movement, such as waves crashing along the shoreline, or a fish swimming in the ocean. In the deep sea, where sunlight is absent, more than 90% of the animals are luminescent. In coastal regions, the primary source of bioluminescence is dinoflagellates, single-celled microscopic organisms that are common members of the plankton. And yet, changes in marine ecosystems have been documented in most ocean regions around the globe, and the implications are significant. Studies clearly show that populations may be down by as much as 40 percent. Losing populations of phytoplankton risks the health of our ecosystems and life.

I began collaborating with Marine Biologist Dr. Michael Latz at his laboratory at the Scripps Institution of Oceanography in 2001 and worked with him again at Latz Laboratory in 2011. My intent was to learn how to care for the single celled organism Pyrocystis Fusiformis, one of the beautiful and luminous bioluminescent phytoplankton that glows in our oceans. In researching and documenting these organisms I became aware of how incredibly sensitive to environmental changes they are and hoped sharing the work could activate a dialogue about our relationship with our natural environment and the significance of even the smallest members of our ecosystem.

In the large-scale photographic works, the bioluminescence’s glow and movement was instigated by my own hand sending a vibration through the seawater that triggered their glow. Each spot and trace of light is a single organism within the population, showing their luminescent phenomena at the scale of the organism.

In the suite of photographs, the bioluminescent organisms were propelled through an agitation chamber, which creates an entirely chaotic environment. In science, this experiment is designed to study the physics of a turbulent flow field and emulates the natural turbulent state of the ocean. I worked with this equipment to stimulate the glow of the bioluminescence in a controlled environment. By working with a low concentration of organisms and a slow flow rate, I was able to produce single flash events, which depicts the luminous expression of individual organisms.

The video work documents the bioluminescent organisms propelled through an agitation chamber, which creates a turbulent flow field like that of the ocean. Using a high concentration of organisms and a high flow rate, I was interested in showing the luminous response of a large population of organisms. The piece depicts the bio-expression of bioluminescence in real time and shows the turbulent flow field in motion.

It is remarkable the poetry of how a nearly microscopic creature of such import to the health of Earth’s oceans and biosphere and which is so at risk from our civilization’s impact, could yet show us how to illuminate the dark. 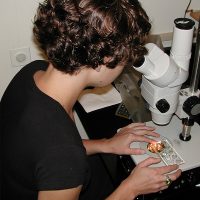 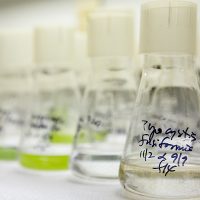 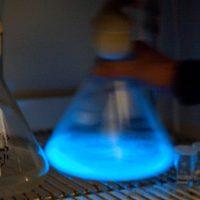 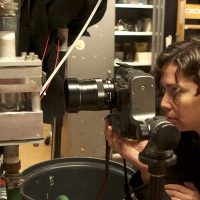