The Encyclopedia of Trajectories project is a quest to activate the long-held knowledge, both scientific and cultural, that we are deeply connected to the universe across its 13.8 billion years. The material comprising our bodies shares cosmic origins with the material comprising the planets, asteroids and comets in our solar system. Scientifically, this material, having derived from distant stars across time, threads back to the primordial material that emerged moments after our universe burst into being. Culturally, our star gazing has filled us with wonder across all civilizations, sparking art and architecture, philosophy and science, mythology, folklore as well as navigation and place-making. The Encyclopedia of Trajectories project intends to study the notion of an embodied relationship with the stars and began with an inquiry into how, in our human form, can we comprehend the enormity of our cosmic heritage—that we are, in our very chemistry, of and from the stars.

To investigate this embodied relationship, I’ve been drawing every shooting star that occurred over a one-year period.  Shooting stars evoke both the wonder of the cosmos and also our longing to have a connection with it, evidenced by the fact that we have, since at least the time of Ptolemy, sent our deepest wishes to them in hopes they might hear us.

Using a traditional ink brush, I am “performing” each meteor—shooting star—that occurred between June 21, 2017 to June 21, 2018 as a single-stroke drawing on Arches Aquarelle hot pressed watercolor paper using 23.5 karat gold suspended in gum Arabic. Gold seemed the ultimate material with which to draw meteors because this precious metal, rich in complex cultural history, arrived to Earth by meteor bombardment during our planet’s early formation billions of years ago. We have also recently come to understand that the element of gold itself originates from the merging of neutron stars, which produces a kilanova event thought powerful enough to create the heavier elements.

In order to draw these meteor events, I collected the meteor data from NASA’s All Sky Fireball Network: a configuration of 17 video cameras across the US that record a type of shooting star known as fireballs. Fireballs are meteors that are as bright as Venus or brighter; They are the brightest shooting stars we see. For each meteor event data set I downloaded, there are multiple videos recorded by the various cameras that captured the event. I select only one video capture to draw per meteor, studying the video intensively to learn the choreography of that meteor’s unique luminous mark across the night sky.

I see these works as performative drawings, not in the sense that it is a performance I do publicly as an event, but it is one I do privately in my studio as a way to embody each shooting star. I literally “perform” with my body the trajectory of the meteor as closely as I can to how it occurred in the sky, as captured by the camera that recorded it. A meteor flung through space from some point of origin has one trajectory. A brush held in my hand and moved from its point of origin—my body—has its own. I was looking for a way to directly experience and re-enact these incredibly vast motions but in a smaller order of magnitude.

I did not initially presume that I could achieve my goal of performing each shooting star as a drawing where the mark I made would characterize the actual event’s uniqueness. To test my efforts empirically and make certain that I was capturing the essence of it, I conducted an experiment before I began the actual drawings. I studied the video data for a single meteor event until I was certain I had embodied something of its exact form, motion, brightness, luminous trail, and the position it entered and exited the camera view. I then made 10 separate drawings of this same meteor event, without referring back to the other drawings or the video itself. My goal was not to merely copy what I saw, but to embody it. In reviewing the results, all 10 drawings were nearly identical—or rather, as identical as a theater production might be as seen 10 nights in a row. There were expected subtle variations between each drawing just as a performance might have subtle variances each time it is performed. Yet the integrity of the subject remained constant and true to its original intended action.

By June 21, 2018, I had collected the data for 5763 recorded meteor events concluding my one-year collection period, and I still continue to draw them. The work has become a daily drawing practice, akin to a meditation of sorts, of learning to embody the stars by re-enacting the trajectories of meteors. 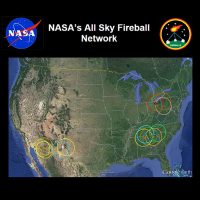 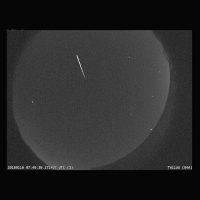 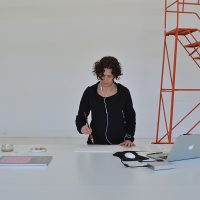