Light is truly one of the great wonders of our universe. Seemingly everywhere, and every when, it is but always fleeting. The desire to catch light and to know something of its essence underlies the curiosity and poetics of the arts and the sciences across the ages. So much of our biology and sensory experiences are perfectly attuned to specific frequencies within the electromagnetic spectrum: visual, audio, thermal. One can imagine light as the great meeting between the ineffable and the tangible: through light we meet and embody the vastness of the cosmos.

The ability of wavelengths of the visible light spectrum to be emitted or absorbed by various conditions and substances in space and our own atmosphere form the basis of the existence of color. Our beautiful blue sky, the yellow sun at midday, the orange-red hues at sunset sparkling across an ocean, the vibrant rainbows and the mysterious aurora borealis are all expressions of the phenomena of light bending, reflecting, and refracting so as to reveal a beautiful enigmatic palette of colors. My inquiry into to the nature of light and my curiosity about the phenomenological world arose when I was a small child. I would ask my parents probing question about the world around me, such as whether they saw the exact same color yellow with their eyes that I saw with mine. Something in me knew this there was a remarkable story within the phenomena of light: in fact, my father tells me that ‘light’ was my very first word as an infant.

Of course, I am not alone in my obsession with light and our experience of it—it has caught the fascination of artists, scientists, philosophers, and creative thinkers as far back as we can see. My own intrigue lies in the question, what is the nature of light? My curiosity does not rest in the answer to this question, however, but soars in the stream of questions that continue to arise in its wake. Intellectually, we have formulated an understanding of the workings of light, but it is in wondering about our direct experience with light that is where my Light Recordings work begins.

When I first began working with the photographic medium in 1987, I was interested in imaging things as they appeared to me “in nature”: landscapes, the figure, still lives, and subtle abstractions of the like. Yet at a certain point in my early photographic practice, something in me shifted for a time; I was no longer compelled to take photographic representations of the things I saw with my eye. In 1998, after eleven years of working only in the photographic medium, a persistent conceptual question arose in my studio that I had to reckon with: wasn’t the thing itself truer to its own nature than the photographic representation of it? Why make an optical reproduction of a sunset, or a person or an object when the real thing is happening right in front of you? Why represent anything at all when you can have an experience of it directly? These questions led me to discontinue photographing altogether for several months, during which time I pursued my interest in light through luminous pigments in paintings and printmaking, but I eventually came back to the photographic medium through an unexpected discovery.

Some of the most potent moments in the studio are when it feels as though a medium is failing you, and the creative existential crisis these moments propel can be valuable times of unforeseen innovation. It was in this way that I discovered a method to record the nature of light I had so longed for. I was making an adaptor to fit my 4×5-ich Polaroid back into a 19th century double-bellows studio camera thinking I would try ‘one last thing’ before I might give up on photography altogether. When I completed the fabrication, I installed the adaptor in the camera to test it for light leaks—often considered the photographer’s nemesis—by exposing a piece of Polaroid film without opening the lens. When I pealed back the Polaroid’s development enclosure to reveal the image, I found that I indeed had a light leak and it was stunning: a perfectly arced gradation of light leaking across the film. The image was everything I was seeking, at that time, from a photograph: a documentation of light itself.

I immediately began exploring the light leaks potential and I have worked with this process now since 1998, building my own cameras in different sizes and configurations that replicate the original light leak. The Light Recordings process pairs photography down to its most essential ingredients: light and light sensitive material. This became the fundamental starting point for my Light Recordings work, and compelled me to image my experiences of daily natural phenomena of light that occurred: the first light of day, light as it interacts with a winter blizzard, the shifting light as the sun sets, the light of lunar cycles, the incremental shifting of light through spring, the solstices and equinoxes. With light as both my medium and subject, the possible phenomena to capture is literally endless: for in every moment, light is new. 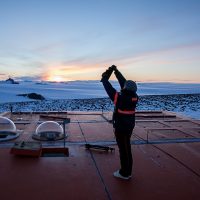 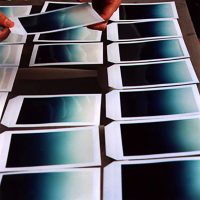 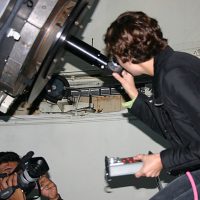 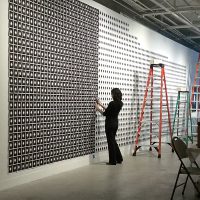