In 2013, I approached NASA with a proposal to make their collections of lunar and meteorite samples—and the wondrous stories they reveal—more accessible to people worldwide.

I’ve been curious about rocks since I was small, always sensing the mysteries held within them. In 2011, my longstanding love of rocks was intensified during an artist-in-residence sailing expedition around the Scottish Isles, where I encountered the majestic basalt pillars and Lewisian gneiss the region is known for, inspiring me to deepen my knowledge of geologic and planetary processes. Ask any geologist about the processes they study, and they will nearly always end their explanation with the same mind-dazzling statement: …but, the story is in the rock. I began to think of rocks as scrolls of knowledge that reveal stories of primordial formation. Eventually, a persistent question arose for me: Might it be possible to hold a rock in one’s hands that tells the story of the whole cosmos?

While the question to hold such a rock in one’s hands is poetic in nature, it is also true that rocks from space collectively tell the story of how our solar system and planet evolved but they also hold presolar materials giving us a glimpse into the space environment before our solar system existed. I’ve come to think of rocks as scrolls of knowledge, passed down through the cosmic, planetary, and geologic ages, that tell these stories of primordial formation. They are objects of wonder and deep time, and they hold within them the cosmochemical stories of connection across the cosmos.

My inquiry into how far back in time the story of a rock might be able to take me eventually sparked an idea, inspiring me to approach NASA in January 2013 to propose the Astromaterials 3D project. To my amazement, they were interested, and I began working on a proof-of-concept study, building an incredible team at the Astromaterials Research & Exploration Science Division (ARES) at NASA Johnson Space Center. By June 2014, my team and I had produced the first-ever 3D model of a Moon rock. In December 2015, we were awarded an official NASA research grant to pursue the production of the Astromaterials 3D project, for which I am both the Science-Principal Investigator (Sci-PI) and Project Lead.

Astromaterials 3D is an information-rich, interactive virtual library of NASA’s collections of Apollo Lunar and Antarctic Meteorite samples that was created as an exploration tool for scientific research and the curious public. My artistic intent with the Astromaterials 3D project has been to provide a novel and dynamic way to make NASA’s collections more accessible to everyone–so that the incredible formation stories held within these rocks that span our solar system, might spark wonder, awe, and inspire research across any field. My ultimate hope is to give you the opportunity to hold–virtually–these remarkable rocks in your own hand.

NASA’s Astromaterials Acquisition and Curation Office, part of the ARES Division, houses NASA’s collections of extraterrestrial samples. These collections include samples from the Moon, asteroids, comets, solar wind, and the planet Mars. Being both scientifically and culturally significant, the samples require a unique conservation approach. Government mandate dictates that NASA’s Astromaterials Acquisition and Curation Office develop and maintain protocols for “documentation, preservation, preparation, and distribution of samples for research, education and public outreach” for both current and future collections of astromaterials. In this way, the Astromaterials 3D project expanded NASA’s unique conservation approach and updated NASA’s sample documentation protocols through the use of novel technologies, some of which my team and I invented to achieve the goals of the project.

It took nearly eight years of development to successfully produce research-grade 3D virtual models of NASA’s space rock collections and create the Astromaterials 3D Website & Explorer Application. The project represents a phenomenal meeting between the fields of art, science, and technology. Through an unprecedented collaboration with a truly singular interdisciplinary team, we have combined high-resolution photography, structure-from-motion photogrammetry and X-ray computed tomography, producing the first research-grade interactive 3D models of the exterior and interior of each lunar and meteorite sample in a single coordinate system. Here’s a brief introduction to our methodology:

The first step is to take high-resolution precision photography (HRPP). NASA’s astromaterials are housed in a multi-cleanroom facility and have strict curation protocols to protect them for research and posterity. Therefore, the rocks must be kept inside nitrogen cabinets at all times during the photographic process. There are also restrictions on what materials the rocks can come into contact with, and in most cases, they can only come into contact with the following materials: Teflon, stainless steel, and certain types of aluminum. Therefore, I could not put a 3D scanner into the nitrogen cabinet to scan the rocks, as this equipment contains materials that do not meet Curation protocols. So, I had to develop a method to manually photograph the rocks through the small windows of scientific glass that exist on one end of the cabinet, which is called the science observation port. Using a custom imaging setup, I capture each image in increments of 7.5- to 15 degrees in rotation, and then at 15-degree elevations, which totals between 240 and 480 angles of each rock. I use high-resolution professional camera systems that range from 60- to 100 megapixels in order to maximize the surface details, and to achieve a final model texture that is “research-grade”. The technique provides images that achieve resolutions as fine as 30 to 60 microns, depending on the sample size and the camera system implemented. This method provides exceptional detail and reliable fidelity of the rock meant to meet the quality demands of both todays and future users.

Each of the rocks in the Astromaterials 3D project is XCT scanned at either the University of Texas High-Resolution X-ray Computed Tomography Facility or at the Astromaterials Research & Exploration Science CT Laboratory at NASA Johnson Space Center. XCT image data provide a complete 1:1 volume data set of the rock, where brightness variation of textural features is related to its density and composition.

My colleague Joseph Aebersold does all the modeling and this is a highly manual process. We use SFM software to produce our 3D reconstructions of the HRPP images using photogrammetric principles. The method uses image-processing algorithms and techniques originating in computer vision to resolve 3D models for accurate and detailed visualization of each sample. The software provides a stepwise process that is then manually tailored for each model based on the unique spatial and specular reflectance properties of each rock.

The process for registering the coordinate system and combining the SFM model with the XCT data in order to achieve the “fused” 3D model of both data sets went through several stages of development before the final method was achieved, originally developed by our colleague Kevin Beaulieu and then furthered by Joseph Aebersold, who now performs this step as well. The Astromaterials 3D Explorer is a custom-engineered browser-based software application that ingests the exterior (HRPP) and interior (XCT) image data and digitally “fuses” them into a single object.

The Astromaterials 3D Explorer application was developed by team member Ben Feist and uses a combination of sprite graphics in the browser canvas and on-demand high-resolution downloads. The data is rendered in real-time within the user’s browser, using a Three.js 3D library on a WebGL platform. This technology enables our high-performance, hardware-accelerated 3D visualizations, providing high-fidelity data that is streamed on-demand and produces the very high-quality sample visualizations we achieve at the lowest possible bandwidth and computer processing power. I had a very clear vision of the world I wanted our viewers to experience while exploring Astromaterials 3D, and the stunning design and graphics that visually tell the story of the project and guide the viewer through the site were developed by team member David Charney.

Every Rock Tells a Story

In order to share some of the incredible formation stories of NASA’s moon rock and meteorite samples, I write veritable biographies for each rock in Astromaterials 3D–I’ve included several in the image gallery above (click the “i” next to the image gallery to pull up the captions) but here is one of my favorites: https://ares.jsc.nasa.gov/astromaterials3d/sample-details.htm?sample=GRO17063-3

The Astromaterials 3D Website & Explorer Application was launched to the public in December 2020 and quickly received global acclaim, with scientists, educators, students, and artists using the site and data products for incredible new efforts. In March 2022 we launched new samples and features, including the ability to download our high-resolution 3D models from every sample’s details page! We’ve also added NASA Pins—a curated selection of surface and XCT features with brief scientific descriptions written by NASA’s Curation scientists, visible in the Pins section of the Explorer.

Astromaterials 3D is as much a rigorous research-oriented library as it is a public artwork, meant to deepen our sense of wonder and knowledge of our solar system through a virtual holding of these rare and remarkable rocks in our hands. At its core, Astromaterials 3D intends to provide greater access to NASA’s space rock collections, making their encyclopedic stories accessible to curious minds across all disciplines and ages.

We will continue to add samples from existing collections and are looking toward the future: to sample return missions underway and planned that will bring rocks back from asteroids and other planet bodies. This is just the beginning…

I invite you to embark on this journey with me and visit the Astromaterials 3D website and Explorer application, now live on NASA’s web platform: 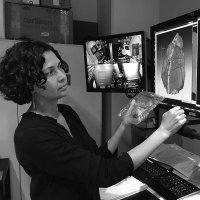 2017, High-Resolution X-ray Computed Tomography Facility at The University of Texas at Austin (UTCT) 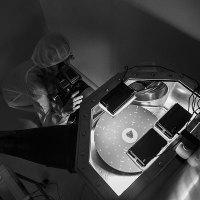 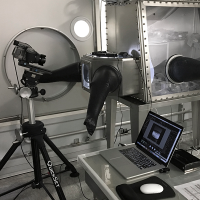 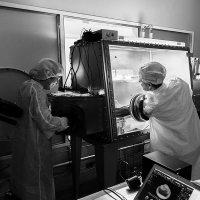