In April of 2011, after seven months without rainfall, the Rock House Fire ignited in Marfa and raged across the beautiful landscape of far West Texas, devastating the region’s environment. I was living in Marfa at that time and, in those weeks while the wildfire reigned, I began collecting material from the burned landscape—carbonized trees, cacti, dirt, animal bones, grasses—and photographed the charred remains and blackened earth.

By July 2011—the 317th consecutive month with above average global temperatures—the National Oceanic and Atmospheric Administration’s Climate Monitoring division had already ranked 2011 as having seen the largest amount of acreage burned in the US from wildfires than in the twelve years previous. Extreme drought across the American Southwest from climactic disruption exacerbated wildfire conditions that year, causing the largest wildfire in Arizona’s history, the second largest wildfire in New Mexico’s history and the third largest wildfire in Texas’ history to occur within just a few months.

For the Wildfire Paintings, I hand-grind the burned debris into a fine carbon pigment and then adhere it to a gilded-edged panel, allowing the raw material to sit on the surface. Each wildfire pigment varies slightly depending on each location’s indigenous flora and fauna as well as how hot the fire burned. In the Arizona, New Mexico and Colorado wildfires the highly iridescent sheen across the surface of the black carbon tells the story of a very hot fire fueled by burning timber. In contrast, the Texas wildfire consists mainly of grasses and dirt and so the pigment is more matte and slightly brown in tone.

For the installation, An Offering to Stolen Nature, I filled hand-hammered Tibetan song bowls with charred trees, grasses, pine cones, and pine needles and displayed them alongside burned volcanic rocks, animal bones and cacti. All of these materials were collected from areas that were private, state, or federal land. At each location that I gathered debris, I was at some point evicted from the land, and in one case was asked to put back the burned material I had collected. This piece considers the innate sacredness of nature alongside the human desire to own or manage the land, exploring the question: has our land ownership in one sense stolen the land from nature? In stealing it back, the piece intends to re-sacralize nature beyond our possession of it.

In the photographic works, I documented the thick smoke of the active fires and the blackened landscape in the aftermath of fire’s blaze.

These works become forensic evidence of the crime of anthropogenic climate disruption—they are a eulogy to the wildfires, and homage to the nature they consumed. Yet, as carbon is both the building block of all life and is itself an artifact of light, these works also intend to look to the regeneration that is possible as we look for solutions. 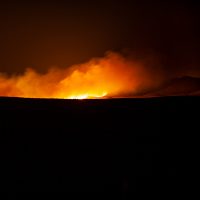 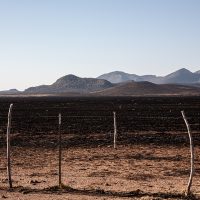 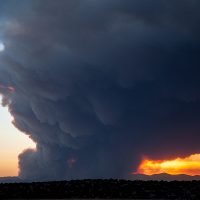 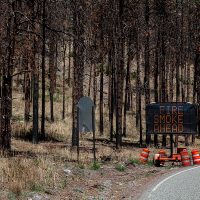